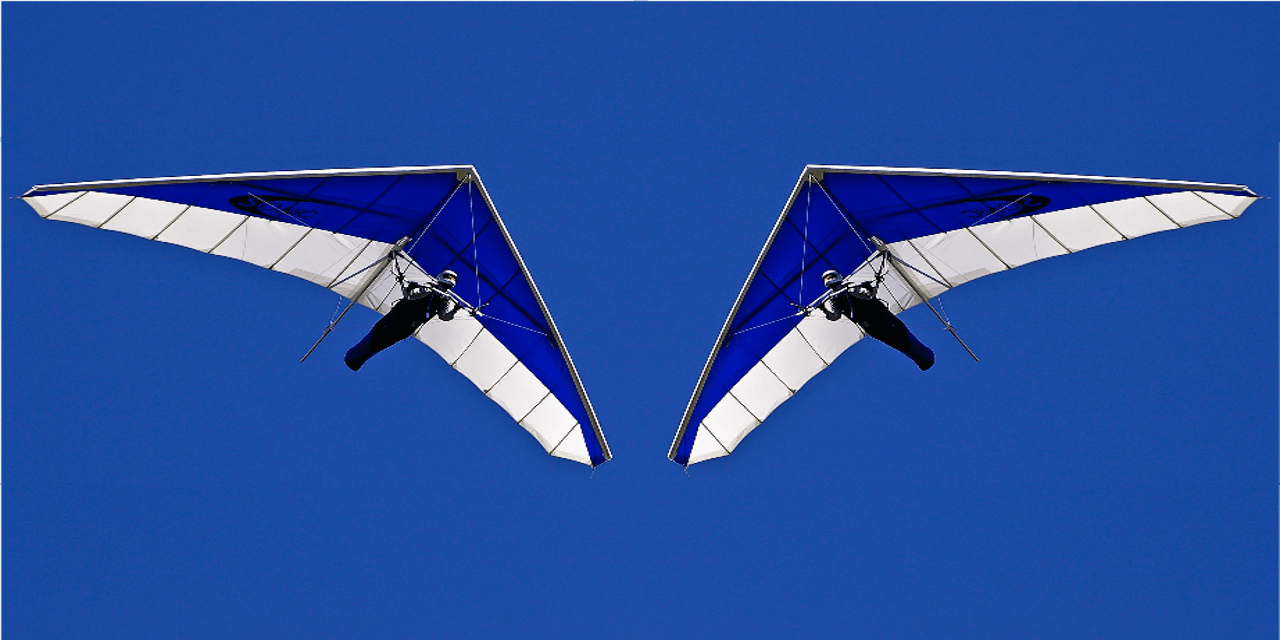 I stood atop a mountain and faced my objective, down there in the valley below. I had trained for weeks and my calves and thighs were just now recovering from the constant shock of bombardment. My ribs were sore but my upper body was better used to the harness now. And why not, I’d been at it for the best part of the entire summer and, like any persevering rookie, I had grown. I had muscles (and muscle pain) that made my clothing tight and uncomfortable – I was a bit buff and my tee shirt and jeans were a size too small because of it. Oh well, it was a small price to pay as I narrowed my vision and studied my target. I had to land this one just right.

Ready? Now you’re by my side and I feel more confident for your company. We’re in this together and it’s pass or fail – together.

You cinch up your chest strap and I cinch mine. Then we, a pair of twins, test our control lines. You glance left and I glance right then we glance at each other. No wind, the clouds are steady and the hawks just float there without banking and diving. We wordlessly nod our mutual assent, step back a pace, run and dive, our hamstrings stretched to the limit by the jump and … the flight down is glorious!

Now, if we could only make the landing, …

Isn’t any worthwhile goal just like that? Exhilarating and at the same time terrifying? Or should it somehow be different than that when we pitch our game to a publisher? Aren’t we all invested in our work? And don’t we expose ourselves to risk – and pain and suffering along the way? And grow over the course of time?

Don’t we develop new skills and experience muscle pain of one kind or another (at least in the metaphorical sense)? And don’t we sometimes either have or imagine that we have someone who is equally invested right alongside us? Sure we do, if not literally, at least within the game design and development community. And what does that community teach us?

Here’s a list of 12 things that game developers and game publishers seem to agree on:

*In part, because of their (supposed) over-saturation in the games market.

So how about you? Are you ready to make your landing? Did you keep your eye on the prize all the way down? Make whatever in-flight adjustments you had to along the way? Of course you have! So, Congratulations! You kept your eyes wide open to indications of change in the overall games market. And, as a result, when you arrive exactly 10 minutes early for your interview, you are confident and steady as you make your pitch.