Here at Black Harbor Games we believe in play. What could be more natural? From the time we’re weened, on through our school years, and straight into adulthood, parenthood, grand-parenthood, and all the way to our very last days we are either playing, or teaching someone else to play, or being taught ourselves. It’s all part of growing up, if we truly grow up at all. And yet, who isn’t some part child? We all are, and we never fully grow up or outgrow the need to play. To enjoy ourselves. To spend some time relaxing. Or competing. Or challenging ourselves at solitaire of some form or other.

So come join us. Learn a new game. Invent one of your own. Share it with others and see what they think. Maybe you’ll have a game that goes on to sell millions of copies. Or maybe you’ll find the holes that keep your game from selling so well. Or just maybe, you’re not interested in sales. Maybe you have a freebie that you’ve designed and would like to send out into the world just to make people happy.

Come and join us, visit for a while, look around and see what’s what and who’s who. And remember, Black Harbor Games is here for you. To help make play just a little more enjoyable. 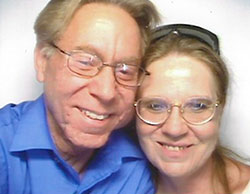 Don has a background in construction as a carpenter and builder. He is also a trained machinist. His strong suits are math (especially geometry and, in the field of games, combinatorics) and logic. He has worked as a secretary, a janitor, a teacher, a painter, a cabinet builder, and as a night shift factory worker (which he hated but did anyway, the working at night bit, that is) among other things.

He grew up on a small farm and has lived in or near (at least briefly) a number of large metropolitan areas including Nashville, Savannah, Charlotte, and a number of Latin American capital cities.

He is married with no children. Has no pets. And walks nearly everywhere he goes.

His hobbies (past and present) include building model cars, collecting action figures, and reading at least 3 or 4 books at a time (mostly non-fiction, and largely about writing or game development, but also a few novels – especially action adventure).

Joelle has a background in information management and customer service.  Her goal has always been to be the subject matter expert – a nexus for knowledge within the organization – and to be constantly looking for innovative ways to improve operations.  She strongly believes that synergy  is the key to accomplishment.

She grew up playing games like Chinese Checkers and regular checkers, Old Maid and Go Fish, and eventually, Scrabble.  This last became her favorite (largely because she regularly bested her mother).

As told by Don and Joelle

COMPANY HISTORY AS TOLD BY DON

As I remember it …

It was about five years ago, 2013 or so, maybe 2012, that my wife and I first entertained the idea of designing games for a living – or at least as a hobby. Work was slow and money was getting tight, again. The way it always did and always has and always will for anyone who follows a construction boom and stays a little too long after the party has ended and the tide has shifted and the movers and shakers have moved on and begun building elsewhere. Without you.

Age was creeping in (not that I like to admit it) and the sun and wind and rain and years of heavy labor as a carpenter and builder were upon me. (Oh, boo-hoo.) But I really was getting tired deep down where your heart aches to do more but your body just won’t let you do the things you’ve always done. Not anymore. Not like you used to.

As for my wife, she was making good money and working in an air-conditioned office. Gently aging and just starting to believe that one day, she too would retire. What would that be like? Where would we live? What would we do? … But that day was still many years in the future.

So why not start planning ahead instead of being pushed by the tide? Why not try our hand at writing? Or publishing a magazine? Or developing a board game? Or a dice game? Or what about cards? Couldn’t we at least look into it? So we did.

We took a few college courses (mostly about writing), read dozens of books (again, the majority were about writing and publishing but also about crossword puzzles and games), browsed the internet (looking for who knows what, but we’d know it we when we found it – which we never did), and began tinkering with games.

Suddenly, a handful of change became a plaything, points to be won and counted and redistributed. A list of words became a puzzle (which, by the way, lead to a LOT of research into semantics and linguistics and word frequency and phonemes and lexemes and … if you know what I’m talking about here, maybe you’ve been caught in the same haze and hopefully you too came out ahead for the effort).

Then word dice followed. Combination after combination. Only to be followed (no kidding) by 150 – 200 codes that someday might serve as the basis for a children’s or young adult’s book on codes and ciphers.

Next came a hiatus from games and a concentration on fiction. We set the goal to each write and submit to the other, a series of chapters that would become a World War II novel – but that project never really jelled. One of us (I won’t say which) was writing an adventure novel with little or no need for characterization, while the other was writing a book strong on relationships and light on action. Someday … someday, we’ll get back to that one.

I think a baseball simulation came along somewhere in through here, and horse racing, and again, custom dice. This time, for the horses. With the idea of moving the horses the distance you rolled, with favorites and long shots pretty much predetermined by the dice – unless they ran against their probability, which was the whole point of the game as I remember it. Again, someday, someday.

Then along through the winter of 2016 and again in the cold snowy days of 2017, we prototyped a number of games using cut-open cereal boxes taped together as game boards (using the unprinted side of the cardboard, of course). And for the first time, we had a lot of fun. Both with the inventing and with the prototyping, as well as near endless hours of playtesting. Game after game. Filling notebook after notebook (and the back of every scrap of paper or receipt or library-book due-date slip that was anywhere near the table) with strategies and revisions and new ideas for further games and adaptations of ones we’d come up with in the past. Oh! And scores, of course. Usually with my wife winning almost every game.

Were we really on to something? Or just having fun? Maybe we’d hit the saturation point and were over the hump of the learning curve and making headway in our newly chosen field of endeavor. Maybe, maybe. Just keep hoping.

Then we sat down and talked it over and decided to commit. Rent an office. Set it up. Share what we’d learned with others. So, we did commit. And do all those other things. And started giving “Build Your Own Board Game” workshops. Then we went to the mall when a local game store invited us to come set up and playtest a few of our games. And we got some good feedback. Positive reinforcement. And then, well, we’ve just kept going and growing from there.

And for that, we’d like to thank everyone that’s had a share in helping us along the way. Thank you, thank you. We couldn’t have gotten here without you. Thanks again.

COMPANY HISTORY AS TOLD BY JOELLE

Well, as I remember it …

Our beginnings go back a little farther – 10 years ago, or there abouts.  Back then we were augmenting a dollar-store chess set with fantasy pieces that told the story of royal children in danger from dragons in the forest.  From there, suddenly, we had enlarged decks of cards with blue and green suits and additional ranks and we were playtesting extravagant versions of euchre.  Little did I know that these precursors would point forward to Black Harbor Games.

One day we would be carving up oatmeal boxes and egg cartons and the next day we would be modeling clay (or, in its absence, a paste of corn flour) and testing new shapes for dice and designs for dice towers and other hideous treasures. (Did I say hideous? I meant truly unique.)

Now, years later, some of these very designs (or their cousins) are making their way into our games. Who would have thought it possible? And yet, here we are. Presenting our games to the public.