Been There, Done That: What NOT To Do When Prototyping Dice 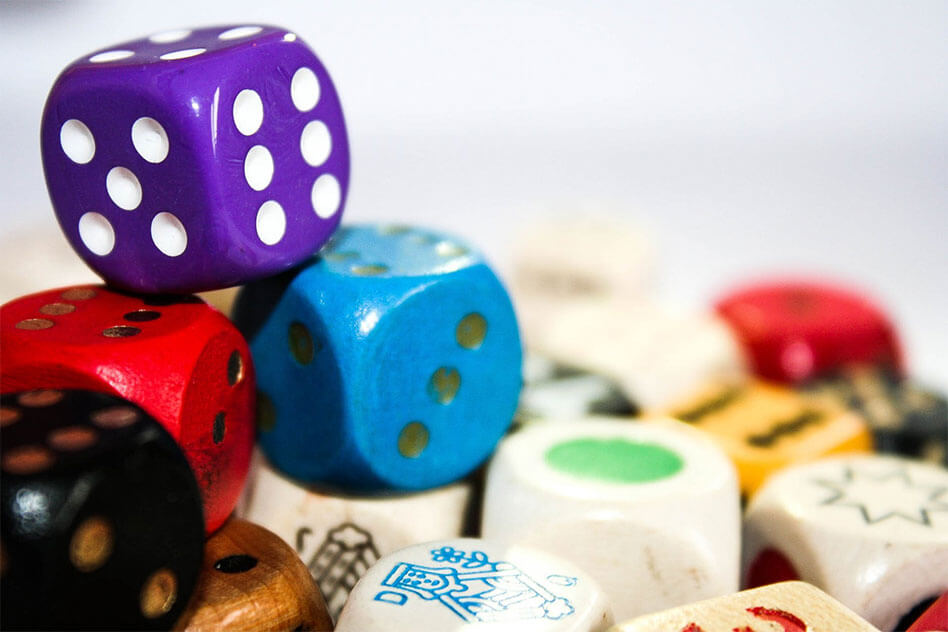 Let’s face it, dollar store dice are a dime a dozen and the temptation to use them is only natural. Why? Well, think about it, would you rather pay a dollar apiece (or sometimes a whole lot more) for custom dice? And if you did, what would you have? Dies you’d only use once or twice and then change. And change back. And change again. Iteration after iteration. Time after time. Because, well, that’s just the way it is here at the discovery phase. Prototype 1. That ugly little sketch with stick men you’ve drawn on the back of a napkin.

Now, imagine yourself in your work space with those scrawled out notes and little tiny arrows pointing to ideas you’ve tucked in the margins. Everything is in flux. Every single aspect of your latest and greatest game is liquid. Are you with me so far?

There, to the left, you have your cheapies. Things you’ve bought at the dollar store or maybe robbed out of an old game. And, next to you on the right, you have your modification kit. A shoe box filled with masking tape, Scotch tape, circles and stars, stickers and what not. And pens. Indelible, of course, because you never learn. You just keep on doing the things you’ve always done and somehow believe that this time, with this game, you’ve got it just right, straight out of the gate.

Don’t laugh. I’ve been there and done that. And thought that very thing. And just to prove it, here’s a summary of a few not-so-great results I’ve had working with pre-beta prototype dies here in my shop.

A few years ago, I bought 10-for-a-dollar dice and set them up for a horse race game. Planning ahead, I decided to use the top 5/8” of Post-it notes cut to the length of 3 sides of a die (about 2”). The notes came in pads of 50 or so and each note had that wonderful adhesive that was so easy to use.

So, … 10 dies times 2 strips of self-adhesive Post-it material each equals 20 strips. That’s not much, I reasoned, why not cut them all at once. One big stroke from a pair of kitchen shears. No. Didn’t work. The shears wouldn’t cut that many without binding or crimping the edges. So, on to plan B. Cut 5 or 6 at a time. Which worked a whole lot better. Until I went to separate the note strips and apply them to the dies.

You see, I had overlooked the fact that Post-it notes are made with the adhesive only on a portion of the note for a reason. To give you something that isn’t glued down to get hold of so as to remove the note from the pack. All I had was a rather thick strip of paper, not individual strips. My wife bailed me out though. She patiently used a hobby knife to separate the note strips from one another and save the day. …

Until I wrote on the paper strips with, you guessed it, an indelible marker.

Why would that ever be a problem? Well, did you know that Sharpies (or any other brand of marker) are indelible only to the extent that the material you’re writing on is absorbent? Or at least stable? And/or maybe you should wait until the ink is dry?

The moisture from my finger tips was enough to smudge the ink (which I probably applied too thick or in some other way incorrectly in the first place). My poor dice, they were getting a work out.

To solve this problem, we added a layer of transparent tape to protect the Post-it strips and cover the ink. The ink couldn’t smudge because it was under the tape. Which worked very well.

Except that the edges of the tape and the cut ends and the compound layers all conspired to make the dice a tiny bit out of true. But hey, this was only prototype 1. Things would be better next time. Only they weren’t.

Next time, getting ready for a playtest event, I used blank dice and covered them with peel-and-stick transparent labels I printed out on an inkjet printer – in just too big a hurry (as usual).

I can report that the labels I used were great, but the ink took 2 days to dry. And it smudged wherever I touched it. But then, I did apply the labels within a few minutes instead of waiting. So, just as you might have guessed, the Scotch tape was brought back in for an encore performance. Which made these particular dice lumpy and bumpy because I was working so late that I couldn’t see straight. Or at least, that’s what I keep telling myself.

And, well, I could go on and on. Here are a few quick tips in closing: